#MCM: Kenneth Kanaabi, a young designer envisioning togetherness of communities through his craft

Written by Derrick Asaba on November 1, 2021

Kenneth Kanaabi, 25, is an upcoming multidisciplinary designer and very passionate about design. Born and raised in a financially humble background, Kanaabi has defied the odds to brand himself a victor in most of the schemes he sets out to work around.

Kanaabi is born to creative parents; His dad, Mr. Joseph Nsimbe is a technician who he best describes as a multidisciplinary technician and his mum, Ms Angel Nakalyango, is a makeup artist. 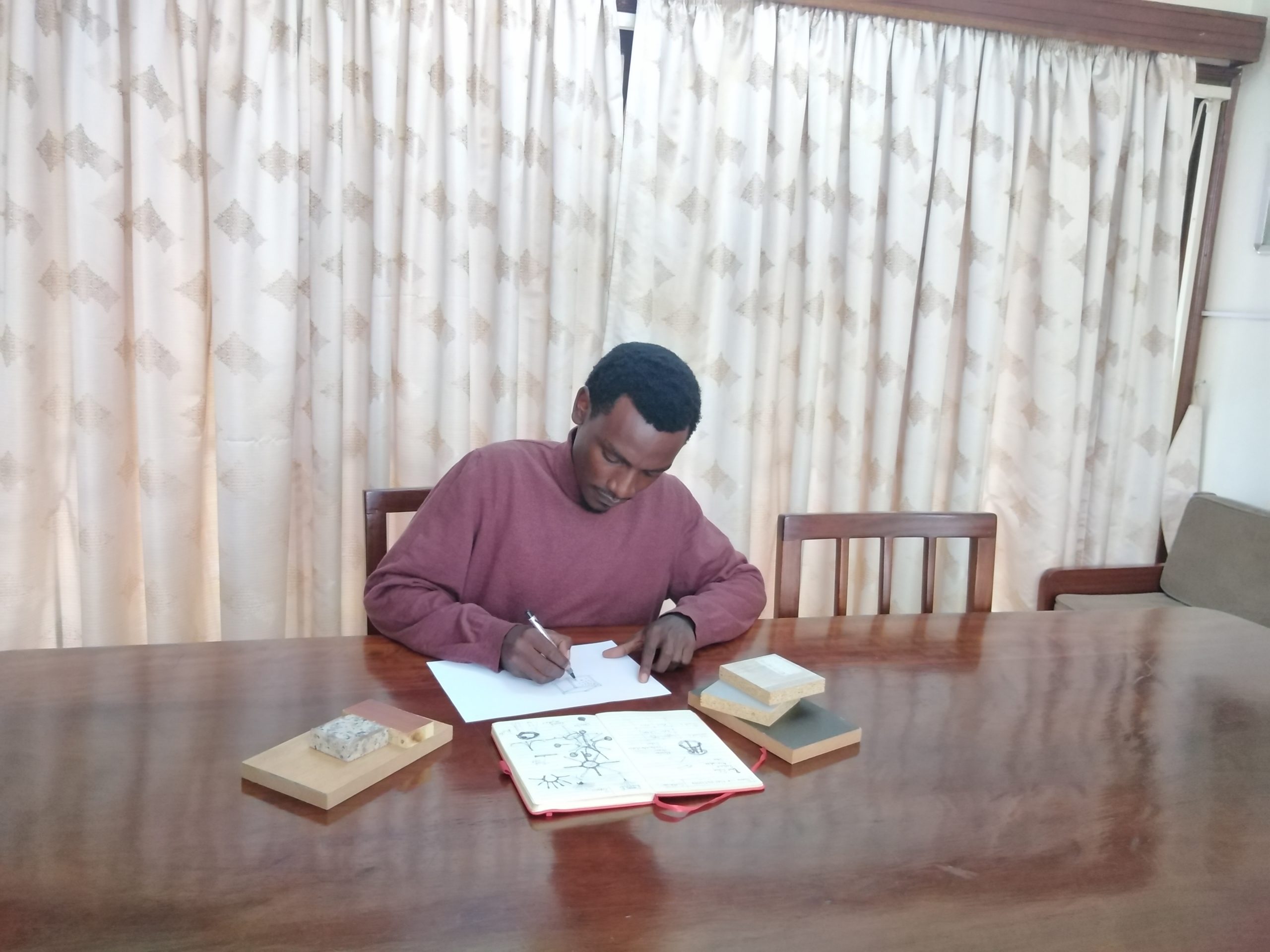 Kanaabi’s passion for design led him to architecture school to study design and understand its essence.

Kanaabi’s family background inspires the designing career he exercises at the time which mostly aims at making people happy. He says that his passion for design led him to architecture school to study design and understand its essence.

As a child, he enjoyed the experience of playing around his home’s vicinity with toys together with child friends. Uniqueness of his story however, is that as his friends drove manufactured toy cars, he drove rough wooden cars made by his dad.

“To me, these were so ugly by then. What was more challenging, we used to compete with my friends and they could show how their cars were faster than mine. Indeed, I always lost because I had to walk with it around such that it could move, vibrate with my mouth and that is the joy I got in the end. The rest of my friends could just pull a string and the car moved so fast,” Kanaabi narrates.

It’s from this kind of background where Kanaabi comes from that his parents would make things for him and other people which would not only make them happy but also cleared a way for them to get some money to support the entire family.

Because he used to see the way his dad started out on making an entire piece, Kanaabi was strongly desirous to do the same when his time had aged. Young as he was, Kanaabi’s first visit to Kampala City stamped this idea (designing) the more in his wits. This was to Rubaga Cathedral Church whose interior blew him off while he was in the infant classes.

“We visited many places in Kampala that day and that’s when I interfaced with tall buildings which I had never seen in my life. I told my dad that I wanted to create something like that which people would look at and wonder what kind of person created it. I didn’t know that it was architecture. However, my dad told me that planners are the people who make such things and I told him that I wanted to be a planner,” he says. 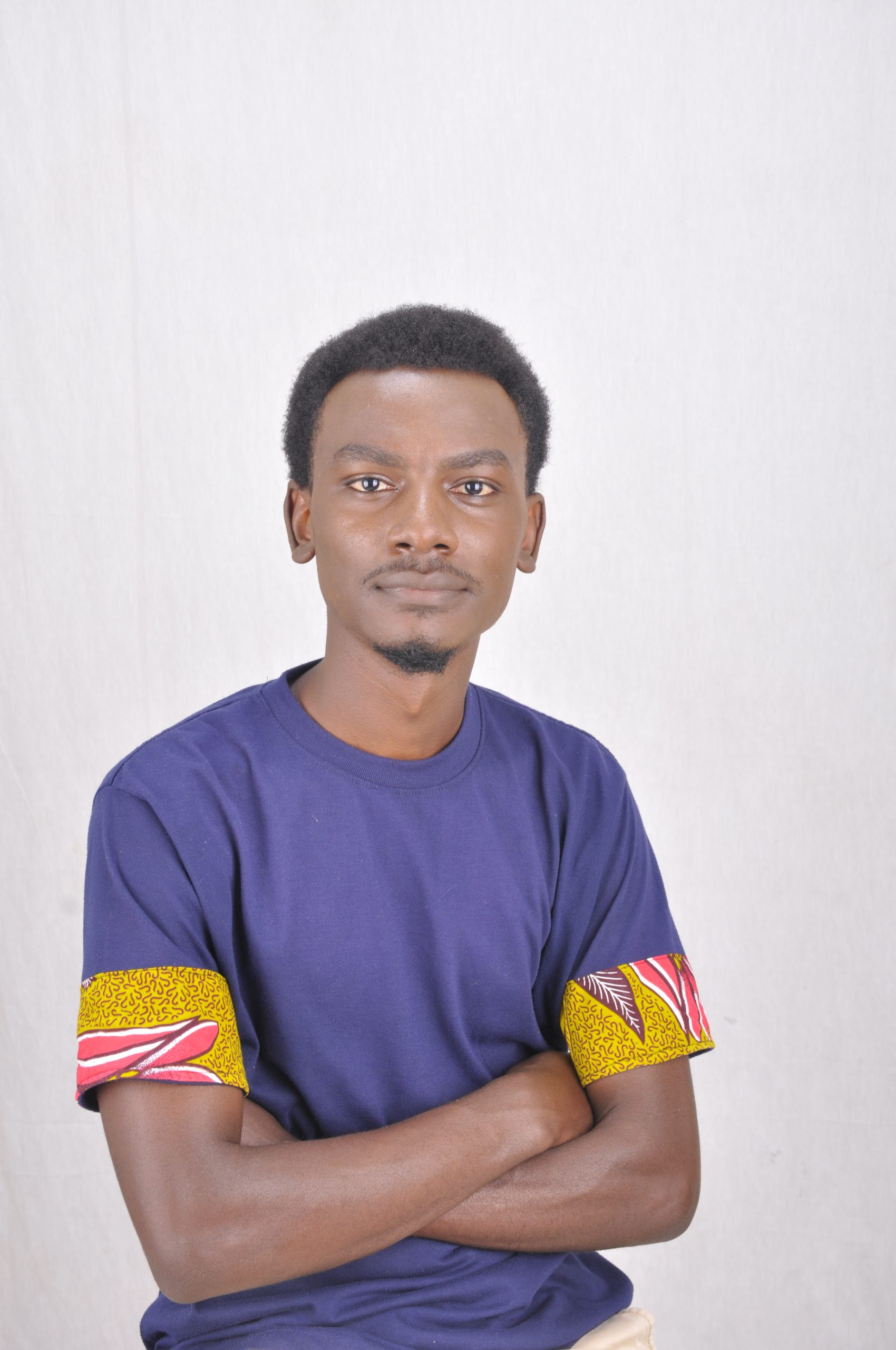 How it was while at school

From Kibuuka Primary School, he joined Mengo Senior School. This progress to another education level equally had to reflect upon his character, he started getting more independent as he reveals.

He had to plan for the little money he was given on a daily basis so that it could cover his transport fares to and fro school and also, cater for his breakfast while at school. This case was quite different from his primary situations which thereby taught him how to plan for money.

At Mengo S.S, he was exposed to a variety of subjects just like his peers in the same class. Most of these subjects nonetheless were hands-on-alienated like metal work and woodwork.

“As a creator, it was fascinating for me because I saw it as if a home workshop was being brought to school. By default, electricity and electronics, woodwork and Technical Drawing were being done in the stream that I subscribed to. This exposed me to understanding the simple basics of drawing, product designing and understanding materials. I captured a lot of information for the four years I was doing that,” he says.

“Our first project was to design a simple duster. It gave me too much difficulty to chop a piece of wood, get the right material to stick onto it such that at the end of the day it could be used to clean the chalkboard. It was really amazing that I even took home to pride in. I didn’t continue in the woodwork class but I also made trays out of wood,” he remembers.

As seconds bore minutes and days bore months, Kanaabi’s sense of humour outlived the fact that he always denied it practice. His peers severally urged him to join the School Information Prefect then, Joshua Emmanuel Mubiru (alias Jiame Josh ― of Record FM) but he used to turn their suggestions down.

Eventually, he heeded their plea and joined Josh, who together, they produced a weekly news edition. Kanaabi started by mimicking celebrated radio death announcements anchor, John Ssalongo Ssekandi, in reading imaginative announcements which pushed him to more microphones. The ilk of news they always created was formal and partly imaginative to amuse students. In some way, they became school public figures and students respected them.

Looking back at what he used to do, Kanaabi says that he thought he would be a comedian at some point in time. The more they practised this, the more they got connected to different role models. He was always invited for different Comedy open mics since he had proven that his craft matched that line of art.

He recalls that in 2014, he was one of the 25 comedians who participated in a Talent Search that was organised by Pastor Wilson Bugembe at Light the world church. It was when he interacted with a new and different audience.

“It was a big audience, born-again, couldn’t laugh at some stuff ― it was really tough for me. I presented and emerged third (2nd runner up) in the end. Among the judges were Pablo, Kadima, Rebecca Jjingo and Pr Wilson Bugembe. They used to bring in actors to motivate us and everything rotated around how we could convert our talent into money. I used to look up to Pablo so much and he advised me to pursue my talent professionally,” Kanaabi tells.

His humorous and comic nature somewhat made his teachers think that he was wasting time and wondering whether he was to bolster doing sciences or arts. He did Physics, Mathematics, Technical Drawing and ICT (PMTd/ ICT) and was awarded a Government scholarship in Gulu University. He dropped this offer for Architecture because he was given a course in Bio-Systems Engineering that he never wanted.

When he joined Kyambogo University in 2016 to pursue a Bachelor of Architecture, he never wished to sweep his comedian-mind off. Against this, he thereafter in 2017 talked to the chaplain of the University Chapel, Rev Eng Emmanuel Mwesigwa about joining the drama group of the chapel but instead was asked to form one. He created a group dubbed St Kakumba Drama group.

He could write stories based on the reading of that Sunday in a very interesting way, get the right people who could rehearse and act out the roles. In a way, students would come for the sermon and go back with a smile. He however resigned from this post when he got an opportunity to study in Spain.

Actualizing and making the dream workout

He was one of the two students selected under the Exchange programme that enabled him to study at the Universidad de Las Palmas de Gran Canaria, in Spain. He went in his third year second semester for an eight months period and returned in February 2020.

As 2020 was a riddling time for most people, Kanaabi registered a stiff triumph in that year. On returning from Spain, he landed on his feet in two competitions which his victory over, was a milestone he talks about with a smile on his cheeks.

Together with a colleague, James Musasizi, they emerged first runners up in a competition organised by the Architectural Association of Kenya. It was an open and international competition that sought to find out ideas and solutions to the problem (floods) that hit Kenya that year which saw around 230 people kiss the soil. The task was to design a house that could be resilient to floods, cheap and constructed below UGX 7Million.

“That competition gave me a green light to continue believing in myself. Sometimes we have ideas in the sketchbooks and think they don’t make sense. But when we put it out and people appreciate it, we realise we have something to put out. We were told that the ideas would be implemented and that’s the biggest award ― saving people through design,” he notes.

Kanaabi also participated in another competition back home with the Uganda Society of Architects (USA). This was the ‘Meritorious Award Students Design Competition 2020 with the USA’ where he was the third. They were tasked to design an annual award that the society would give to the outstanding architect.

Still reasoning with 2020, Kanaabi sat down and analysed the whole situation of how the pandemic and elections had all brought about a mixed feel. He challenged himself as a designer to come up with something that would restore the spirit of togetherness and improve the level of patriotism in the country.

He gave birth to the idea of ‘60 stools’. In his view, stools played a pivotal role in ancient history. Local leaders used to converge, sit on stools (a piece of stone or rock) and discuss societal issues of development.

Hopefully, he will launch these stools as Uganda celebrates her 60th independence day. He has so far 25 ideas where each stool tells a story ― a story that looks at uniting everyone from all the tribes in Uganda. Of all these, he has only implemented one because of financial limitations. He is pushing the first idea ― Kitole, which he launched at the start of this year.

He has a number of stools underway more so, these are friendly to the environment. He employs humour and a poetic approach to remind people of some of the interesting moments they have had and forgotten about. He observes what is happening in society through capturing stories and develops a concept that tells stories in one piece.

To reach out to him, (perhaps make an order for the Kitole Eco Stool that is on market) one can text him on Instagram at kampala_kanaabi. He chose this appellation, ‘kampala_kanaabi’ because Kampala is an interesting city located on 7 hills and each hill has a specific story. His name, Kenneth Kanaabi has 7 letters each, too.

Kanaabi spends most of the time lately at Proplan Partners Limited, an Architectural Firm situated in Bugoloobi awaiting school completion this year. He is inspired by Architect David Mugamba, Trinity Heavens in graphics and designing, Oki Sato (Japanese Designer, Architect and the founder of Nendo) and of course, his dad.

‘I am the Imperfect but most loved child of God’ ― Gospel singer, Renez. 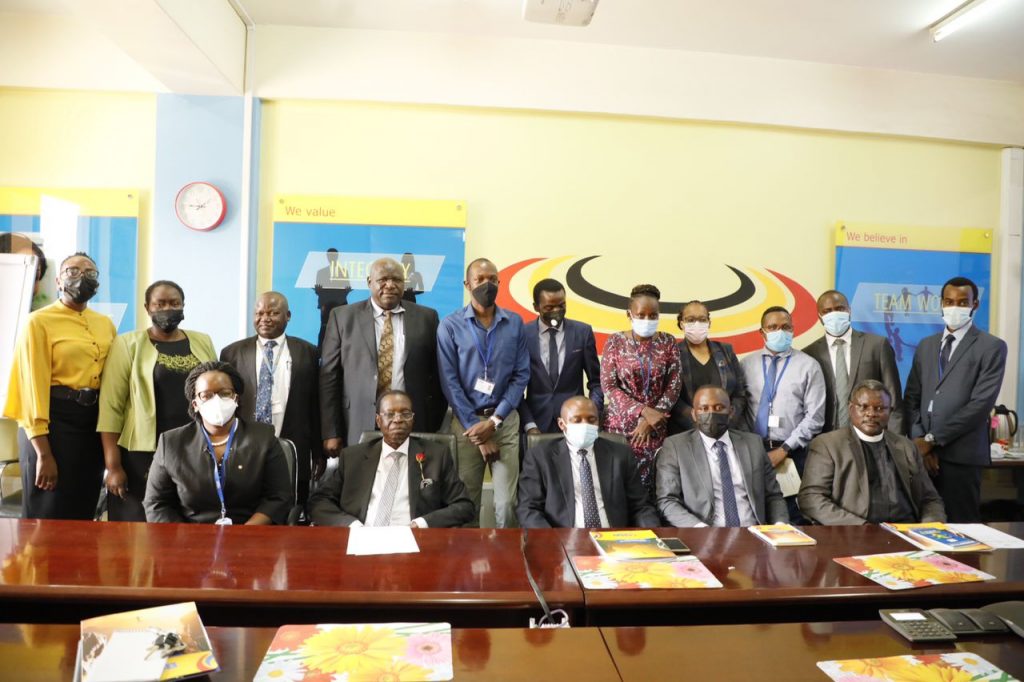